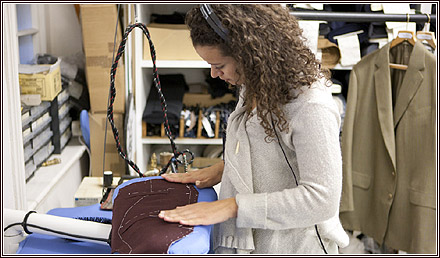 I usually use the dry iron on my bench for pressing the parts of the jacket I’m working on, but occasionally I will use the vacuum table outside (pictured here).

A dry iron, as the name implies, doesn’t produce any steam of its own. It relies on the cloth underneath being damp to produce the steam. That means you have to hold the iron in place for far longer, and it is a lot heavier than the modern steam irons.

I would usually use the steam iron and vacuum table for work that requires a flat, tight finish. One example is the dart that runs down the middle of the forepart, on the chest. If that has been opened for an alteration it will need to be pressed down really flat at the end, to maintain the smooth finish to the jacket. Another example is the seam down the inside of the sleeve. Often it is seams that have been done by sewing machine, as these two are, because the sewing machine is trying to achieve the same thing – a more uniform and precise line. I also use it to press the chest canvas flat when it’s all been sewn togtether (by hand).

The vacuum table sucks the iron’s steam through the cloth, speeding up the ironing process and drying the cloth far quicker. They came in in the eighties – many of the more senior coatmakers remember before they were introduced and speak of them very gratefully.

But Derrick, who is training me, wants me to use the dry iron whenever I can, partly because it was the way he was trained I think. Also it’s fair to say that the vacuum table is better for some parts of the suit. Trousers, for example, and parts of the coat – usually those with a flat, 2D finish. It’s not that useful for waistcoats, as they have to be consistently curved.

I also press the chest using something I made recently – a bust cushion. This is a large oval cushion that I made by sewing two pieces of tweed together and filling them with scraps of cloth from the floor. It took a while to get enough together.