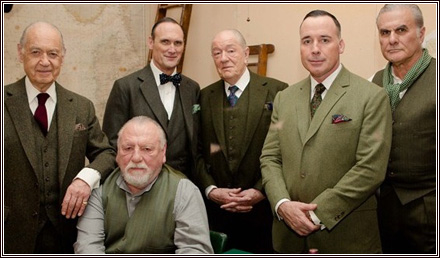 For the last 3 months, the entire Anderson & Sheppard team has been working on the organisation of the latest group presentation for London Collections: Men.  The collection included 80 models and some volunteers who were new to the modelling world.

Seated around the wooden conference table at which Churchill, Vice-Admiral Louis Mountbatten and the heads of the Army, Navy and Royal Air Force masterminded Britain’s war effort, Sir Michael and his companions were admired by members of the international press and other guests. Writing for The International New York Times, Suzy Menkes reported that the presentation: “was a wistful, yet powerful visual creation of what ‘Britishness’ used to stand for in men’s fashion – and proof that the images of that era still look relevant seventy years later.”

The presentation was styled by Jo Levin and produced by Anderson & Sheppard and Sammy Aki.  More pictures will follow on The Notebook.