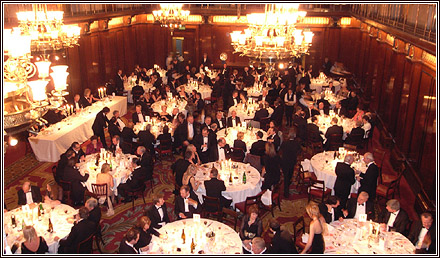 The Master Tailor Benevolent Association (MTBA)’s annual dinner was a couple of weeks ago. It was the first time I’d ever been – though I’ve gone to the summer party a couple of times. That’s more informal – a buffet rather than a sit-down dinner – and this event is black tie.

I loved the traditions of the dinner. It’s a old hall with a great history, and there are customs like rhythmically clapping in the top table and set speeches that make you feel you are part of a grand profession. The standard of dress was impressive, with some wonderful classic black tie and some slightly more modern interpretations. Unfortunately I don’t have my own bespoke black tie yet, but I look forward to having one made so I can wear it to events just like this one.

It was nice to sit with the guests on the Anderson & Sheppard table: Guy Hills of Dashing Tweeds; Simon Crompton, blogger and editor of this site; and Douglas Cordeaux of Fox Flannels. It gave me a chance to talk to Simon, for example, about various ways we can develop The Notebook to bring a more personal touch to the posts. Hopefully you will see that develop over the coming months.

The guest speaker was Sir Tim Rice. He was very proficient and has clearly done a lot of this after-dinner speaking. Indeed, he admitted to trying out one joke on us to see whether it was worth including in a speech the next night. Though perhaps that was just a line. He also did a pretty good job of making jokes about Australia and cricket relevant to an audience of British tailors.

The auctions and raffle after dinner were also nice to see. I didn’t win anything in the raffle, despite buying two strips of tickets and generally being pretty lucky in these things. But I suppose it all goes to a good cause – as does the £2500 that was raised for a pair of Cleverley shoes. I was sorry to see Douglas outbid out on those though – he clearly had his heart set on them!