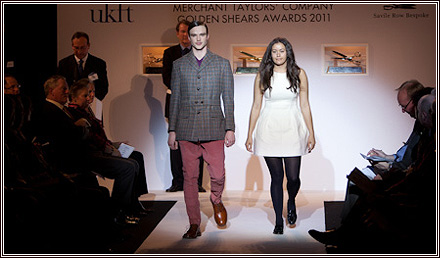 Last week was the Golden Shears competition, which pits apprentices and tailoring students around the country against each other. Apparently there were 80 entries, and I got through to the last 24 that appeared on the catwalk at the Merchant Taylors Hall.

I didn’t win, but I’m not that disappointed. I liked what the winning entrants did – particularly Ichiro Suzuki’s, which came in second. He had frayed long lines down his jacket by hand, exposing the cloth below, which looked very impressive.

This stage of the judging is called the ‘style’ section, with four judges sitting at the end of the catwalk and giving their instant scores for each entry. This means it is all about the impact your entry makes, unlike the previous round to get down from 80 to 24, which is judged more on technical merit.

Unfortunately, the model had a little trouble undoing the buttons on the front of my jacket, so the judges never got to see the pink lining, which I had quilted entirely by hand. The leather buttons were rather big and he had to pull the belt through one of the straps that ran vertically down the front, which was tricky. So they didn’t get to see the waistcoat either, which was a shame. I suppose it’s always going to be hard to know what would most impress the judges though – a style judgment is always going to be subjective.

The whole thing went very quickly, so I didn’t have time to get nervous or think about it too much.

Over the next couple of weeks I will be going through some of the details of my entry, including that quilting and the materials of what was a three-piece suit: Norfolk jacket, waistcoat and breeches. 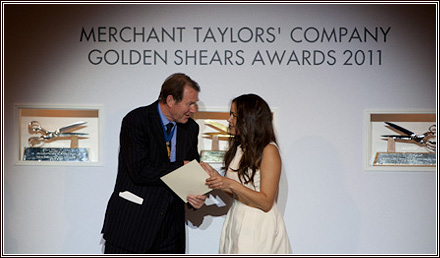