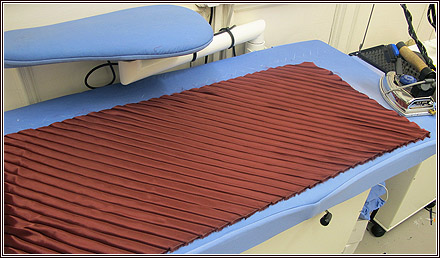 As I wrote in last week’s post, I entered the Golden Shears competition this year and had been working on my entry for the past few months. Here are a few details on what inspired me.

I decided to make a three-piece outfit, comprising a Norfolk jacket, waistcoat and riding breeches. You have to make a minimum of two items of clothing, but I went for a three-piece outfit. I opted for riding breeches because it is something I have never made before – I’ve made plus-fours and plenty of regular trousers. I like the way the breeches are tight through the lower leg (they require a zip to do up at the bottom) and then widen out from a point just below the knee to give plenty of room for movement. The Norfolk jacket, too, was challenging because of all the details involved.

Each of the three pieces is made out of a different cloth. The breeches are a dusty pink moleskin – a material I love – the waistcoat a burgundy woollen and the coat a grey herringbone tweed with pink and burgundy stripes. Hopefully they will all echo each other, despite being such different colours and cloths. A few of my inspirations are Luca Rubinacci, Lapo Elkann and Adam Rogers – I admire the way they combine colours and textures, which to me portrays confidence – and I suppose this combination was a reflection of that.

The measurements that the suit has to be made to are set by the Golden Shears competition, so that all the entries are the same and fit the models. I had to cut the suit myself, which was tricky given the shape of the breeches and the various aspects of the Norfolk jacket, but I originally learnt the basics of cutting when I was at college in Sweden and I’ve learnt a lot more from watching the cutters here at Anderson & Sheppard.

More on the design details of my entry next week. 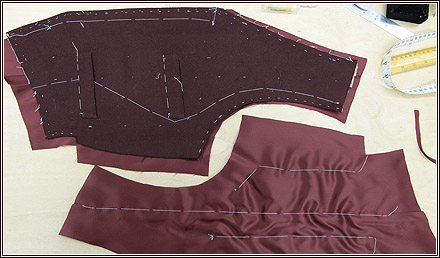