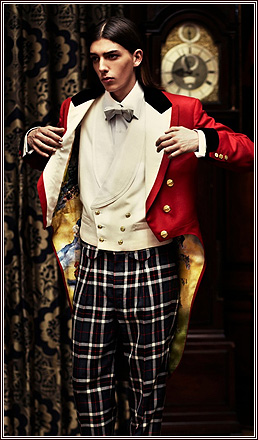 Two years ago I sat in the audience at the Merchant Tailor’s Hall watching Sunna compete in the Golden Shears 2011 competition. Having been inspired by what she had achieved, in early 2012 I decided that I wanted to and was ready to take on the challenge. I sat with my Mum looking through the Anderson & Sheppard book “A Style is Born” and wanted to find something that would inspire me. 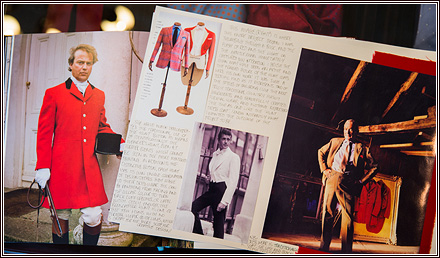 After I saw Sebastian Guinness wearing a hunt coat, it got me thinking. Here was something that would stand out. I then came across another picture of Henry Koehler, but it was the background that caught my eye. Again a hunt coat and dress coat in the form of a painting. I thought it was really striking, but I wanted to take it a step further. Having grown up in Keswick in Cumbria, my Mum reminded me of the local hunt, ‘The Blencathra Hunt’. It seemed like the perfect focus for the project. 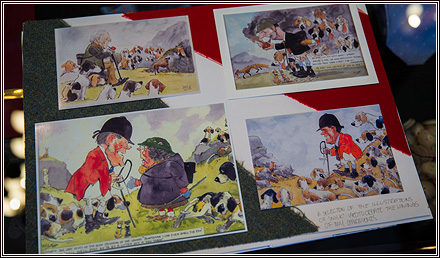 A local artist known as ‘Wilk’ was renowned for doing sketches of the local hunt, illustrating all the characters that used to take part. Wilk had since passed away so I went about talking to his family to see if I could secure the rights to some of his sketches. What I was thinking was using them to create a vibrant lining that would tell a story. 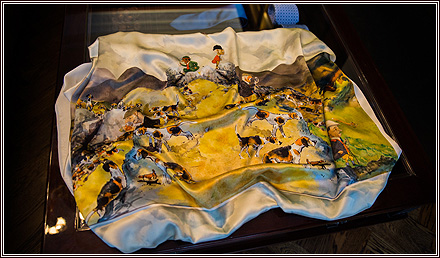 Wilk’s family kindly agreed to help and I set about creating a design with the use of Photoshop. I married the hunting sketches up, creating a scene of a hunt in full flow. These were subsequently digitally printed in Macclesfield onto silk lining. I had to pay particular attention to making sure that nothing would be lost within the seams of the coat, so kept all the goings-on firmly in view. 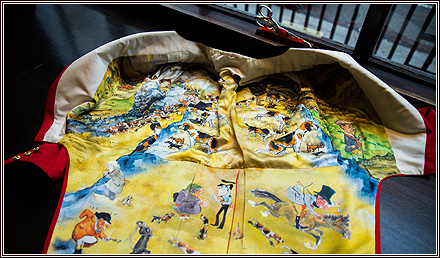 I wanted to highlight some of the characters of the hunt, also made up of some of my family and friends by placing them in picture frames. These were used as the sleeve lining of the hunt coat, waistcoat and the trouser waistband.  I also added a pocket bag which plays the part of a pocket square with a framed illustration of the Hunt Master. 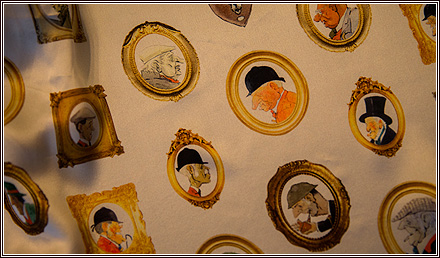 As for the cloths I used for the project, it was really important to me that all were British. The red cloth used for the hunt coat is from a bunch called ‘Eskdale’ by John G Hardy. Eskdale being very close to my home town – so that was a nice link.

My waistcoat was made from the off white A&S stock flannel made exclusively by Fox Flannel in Somerset. I decided upon a shawl collar with the same grow-grain facing as I used on the coat, and also made the decision to add demis and make it backless – making it more formal. It’s also something that I prefer on a waistcoat.

The trousers were an unknown quantity until I paid a visit to the deepest depths of W.Bill. I was looking for a dark cloth, but with something that would tie together the whole look. And there it was: a beautiful check with red over check. This would work so well with the scarlet of the hunt coat. 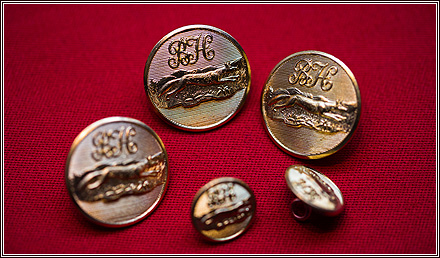 Working with a company in Birmingham and having discussed it with the authorities that be at the Blencathra Hunt I set about updating the hunt buttons. With a slight tweak to the design, I am pleased to say they have now adopted them permanently.

The deadline for my entry was looming, the coat and vest were complete and it was down to the trousers. I really enjoyed meeting HRH The Prince of Wales when he came to visit Anderson & Sheppard, but with everyone present it was a good opportunity to get some advice from Michael and Keith about my trousers!

Finally my garments were finished. It was such a relief, and I was really proud of what I had achieved. But I wasn’t done. I still had to finish my work file, so I headed home to the Lakes to get it done. After 3 solid days of work, all was complete and I was ready to submit my entry. I was there!