Categories: Bespoke Tailoring, Our Team
By Sunna on 15th October, 2012 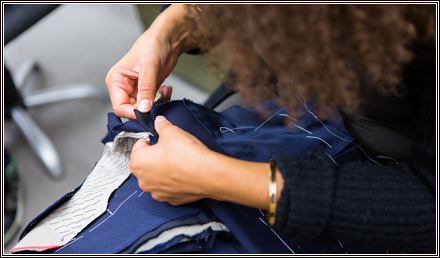 It’s now four years since I started at Anderson & Sheppard, and my apprenticeship finishes next month. From then on I will be self-employed and on my own – I’ll still be here, at Old Burlington Street, but on the other side of the room and no longer working under Derek.

I’m excited about it. I will start to be given my own customers by Mr Hitchcock, rather than working with Derek on his. The tailors generally work like this, so each customer gets a consistent make.

I certainly feel like I’ve been preparing for long enough. I now feel confident in everything I do, having practised it again and again, and Derek is such a perfectionist that he never let me move onto the next thing without mastering the last.

There are a few things that aren’t perfect yet, but most of those just come from experience. Putting in sleeves on a finished garment, for example. I have put them in regularly on a forward, but not on a finished jacket where it has to be absolutely perfect. That will come with practice. So many tailors have told me that it’s not until you go on your own that you really learn to perfect things. Perhaps it’s the sense of responsibility.

Over time you also master different cloths. I’ve worked with every type of material, but some of them not that often. So the more I work on my own the more I will get used to those.