I only applied here

Categories: Bespoke Tailoring, Our Team
By Jennie on 17th January, 2011 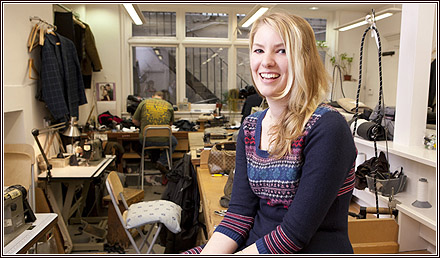 I started at Anderson & Sheppard as an apprentice coatmaker over in Foubert Place a few months ago. I had been studying at London College of Fashion: I was at the end of the first of my two years on the foundation, after which I would have done a third year either in tailoring or specifically in bespoke.

I came in over the summer to see if I could get some work experience here. A few people from the course had done that – coming and working at one of the Savile Row tailors for one day a week. In fact where I work now there is a Newham College student who has been doing work experience for a while.

When I came in I met Mr Hitchcock, and he was just about to go over to Foubert Place to see his coatmaker, John Kyriacou. So I went along and met John and was told about the job and the apprenticeship scheme. I had also talked to Sunna briefly, here in Old Burlington Street, and she had been working on attaching a collar onto a coat at the time. I was impressed with how it was done, far beyond what we had been taught at college. I was keen to start as soon as possible and ended up going to work for John Kyriacou the following September.

I’m glad I did – this is more satisfying that the course I was on, you learn more and you learn much faster. I’ve already got to the stage where I’m preparing all the collars, putting in the sleeves and basting the fronts. I haven’t got on to doing the canvas in the chest yet, but that’s the next stage.

I didn’t apply anywhere else but Anderson & Sheppard and I didn’t want to. I like the soft tailoring approach and the shape of the coat. I had also talked to fellow students that had done work experience at most of the other firms on Savile Row and Anderson & Sheppard was highly recommended.