I was inspired by my father

Categories: Bespoke Tailoring, Our Team
By Ollie on 27th September, 2010 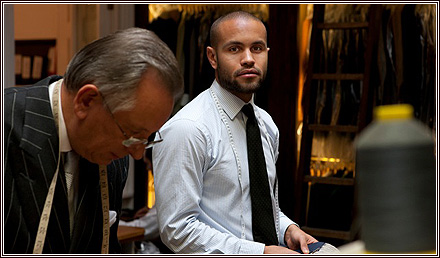 I’ve been at Anderson & Sheppard about two months now. I joined from Newham College – I was in the same class as Finnan but the classes were staggered slightly and I ended up starting about a month later. We actually had our interviews here on the same day.

I’m so pleased to be at Anderson & Sheppard, it’s a dream come true.

My interest in clothes started at a very young age – I was always dressing up. When I got a little older I took a big interest in what my father was wearing. I’d always ask him about cuff styles, the collars and the ties he wore with them. I found it fascinating how many different facets there were to the act of dressing. That translated into an general interest in clothes later on, noticing what people were wearing and finding out what I did and didn’t like, developing my own taste.

But the actual decision to get into cutting was only made three years ago. It was around the time of the BBC series on Savile Row. That wasn’t the thing that made me want to come here, but it was a nice window into that world. I wrote to a lot of the people featured and asked about how to get involved, how to become part of this amazing industry and community.

I decided on Newham because it seemed like the best way to get a good grounding in tailoring. I didn’t have any background in it and the jump would have been too much otherwise. Most people have some kind of training these days, whether it be in fashion from St Martin’s or LCF [London College of Fashion].