Categories: Bespoke Tailoring, Our Team
By Ollie on 27th June, 2011 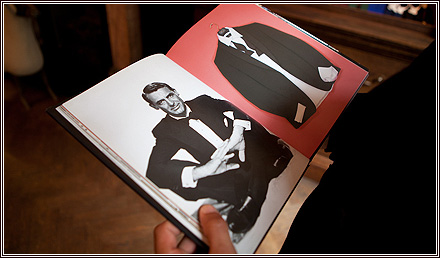 I selected Cary Grant as a man whose style has inspired me. I first saw him in North by Northwest, wearing that famous grey suit, white shirt and grey tie. I believe it was made for him by Kilgour French & Stanbury, or at least the original one was – they must have had several for him to wear through the film, given he wore it in every scene including being chased by a crop duster!

The grey combination is classic and simple, one Grant used as a signature during his career, and it appeals to me as I tend to prefer conservative dress and simple colour combinations. I wear almost exclusively white shirts these days. I’m not sure when I started doing that, but it feels straightforward and smart. Today I’m wearing a navy flannel Anderson & Sheppard suit, for example, with a white shirt and navy, spotted tie.

Grant imposed his personality on that grey suit – it allowed him to be himself. I suppose when you are that charismatic, good-looking and starring in the movie it’s an easier thing to do, but I think suits should do that: reflect the personality rather than dominate it.

Grant brings so much personality to the suit, combining the British style with American sensibilities. He normally wore two or three-button models, very neat and tidy in the cut – that often makes the suit, the way it is cut. I associate it with American movies of the 1950s and 1960s, in other movie stars as well.

Other modern examples of the look are Don, the lawyer in the Coen brothers film A Serious Man, played by Adam Arkin, and A Single Man, the Tom Ford film. That’s a different era but the monotone look is similar.