Categories: Bespoke Tailoring, Our Team
By James on 26th December, 2011 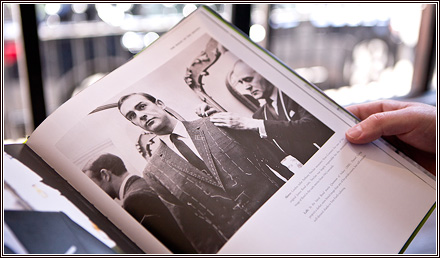 One of my style icons has to be Sean Connery as Bond. When I was younger my favourite was probably Roger Moore, but I’ve since heard arguments from many people on Connery’s superiority as Bond, and I’m now thoroughly convinced. Certainly from a style point of view he is light years ahead.

The best thing about Sean Connery in those roles is the ease with which he carries the persona of Bond, and the clothes are an indispensable part of that nonchalance. His wardrobe almost appears to be an afterthought – certainly there aren’t any stand-out scenes in which the clothes steal the limelight. The clothes merely compliment Connery and make him even more impressive, more suave, than he is naturally. That’s not a bad aim for any good tailoring.

The image that embodies this attitude is a photograph taken during Goldfinger, Connery’s third Bond film, of him leaning against his Aston Martin DB5. He has his hands in his pockets and is staring casually back down the road behind him, surrounded by mountains. In the black-and-white photograph he appears monotone in a grey suit, white shirt and dark tie – though in fact it was a brown sports jacket and tan trousers. Whatever the colour, the fit and the simple ensemble show off the easy elegance that was so characteristic.