Categories: Bespoke Tailoring, Our Team
By Finnan on 4th July, 2011 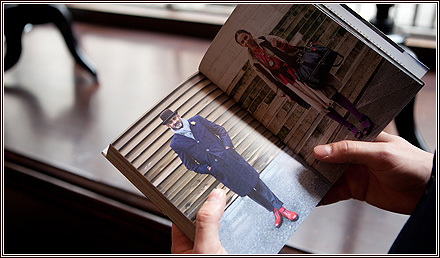 I’ve always liked The Sartorialist’s street shots – they manage to look natural despite being posed. And the style points he picks up on are very good.

This picture, which I believe is of Ignatius Joseph, a shirt maker, caught my eye. I like overcoats with a high buttoning point like this navy model – almost like overalls, that cover-all, utilitarian look. It’s emphasised here by the fact that Ignatius has the top two buttons fastened but the bottom one undone.

I like his yellow flower as well. It’s a nice touch to see a man wearing a flower like this and the colour goes well with the navy coat. It’s not something I would wear, but I admire that kind of touch in others. My tastes are a little more conservative. So I pick up on the grey flannel trousers he is wearing, which also go well with the coat and are something I would wear regularly.

Equally his brown bowler hat – it works well on him but I don’t think I could pull it off. And that’s without touching on the shoes!

In general the shots on The Sartorialist tend to highlight classic Italian clothing. Other shots in this book I admire include a vintage linen suit, a brown three-piece that apparently was owned by the subject’s father, and a lovely blue flannel worn with a grey scarf tucked under the jacket. Very stylish.