Categories: Bespoke Tailoring, Our Team
By Finnan on 11th October, 2010 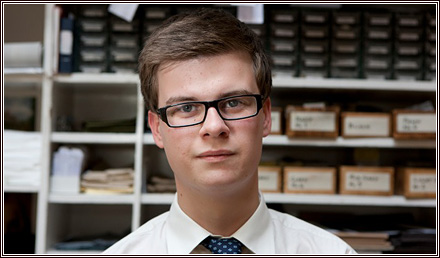 I just joined Anderson & Sheppard four weeks ago. I’m training as a coat cutter under Mr Hitchcock. I started with some single-breasted waistcoat patterns, which are probably the easiest thing to do when you start, certainly easier than a coat. The hardest bit is learning how to do the sections that are drawn by eye – around the armholes and the bottom edge. The measurements are fairly straightforward but getting those sections right takes a lot of practice.

Mr Hitchcock showed me how to do it first, then James showed me again, and finally I tried myself four or five times. By the last attempt Mr Hitchcock said it was quite good, but you have to keep on practising and I’ll do that as much as I can in my spare time.

I’ve been writing everything down as I go, taking rough notes at the time and then doing it more neatly at home later. James also kindly photocopied a book he has that is wonderfully drawn out by hand, running through all the cuts and all the lays. It’s particularly good on what to do when something doesn’t fit a customer quite right – where the problem might be and how to correct it. You might just have to take a quarter of an inch on one side, but it isn’t necessarily obvious at the time.

I practice at home by making trousers for myself too, Oliver made me a pattern that I’m working to. I learnt how to make all these things myself and college and during work placements, some of which were here with John Malone – usually on a Friday or Saturday whenever I had time.

What with the notes and the practising you might think it’s pretty long hours – but I was at college at the same time as working in Tesco four days a week so this seems pretty easy. And now I’m working full time at what I love.