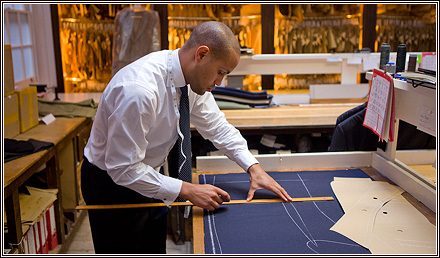 Myself and Finnan started learning to cut coats properly just before Christmas. Mr Hitchcock began by showing us the basics and a few weeks later we’re beginning to get the hang of aspects of it. When we joined Anderson & Sheppard we were taught how to cut trousers and then waistcoats initially, so it’s nice to get onto the coats.

The trickiest thing is drawing the parts that are done free hand, such as the armhole and the front edge. We cut a little differently from other tailors at Anderson & Sheppard, with more reliance on rock of eye, which means these aspects require a lot of practice. You can see how instinctive it is for cutters like Mr Hitchcock and Danny, but it takes a long time to get to that stage.

We had been striking out coat patterns drawn by Mr Hitchcock for a while, so that gave us an idea of the right line to take along the front edge and exactly the right scoop to get through the armhole. But it’s a degree harder when you have to do it yourself.

With the front edge, the key is to get a really nice line with just the right amount of cutaway towards the bottom. Too little and the coat can look very square; too much and the style dominates. The armhole is harder though, because it varies more with the client’s size and characteristics such as how prominent his chest is. We are working on standard sizes at the moment. When we begin with real patterns those aspects will become more important.