Learning to cut my first trousers 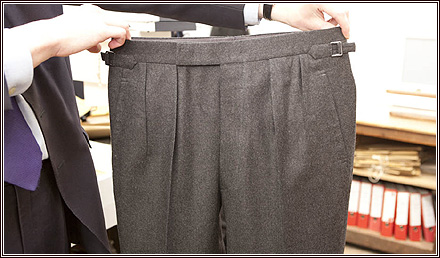 When I first joined Anderson & Sheppard I quickly realised there was a lot to learn about how the organisation works and every process is related. You just have to observe the logistics, the customer relations and the interaction between cutters and tailors, and steadily learn. Working as a trouser cutter under John Malone, my first real tasks were to organise appointments, enter things into the books and run jobs back and forth. Doing that all day you learn very quickly, but it still took a year before I felt I knew every aspect of the business.

Then you learn about the cutting, first by observation. I watched John Malone strike patterns and set out the best lay [how the paper patterns are arranged on the cloth], taking notes and memorising it all, including how to deal with different cloths and different weights. Within the first six months or so, I started striking [cutting] my first patterns onto the cloth myself, again with John watching me.

The hardest thing at the start is this feeling of enormity in everything you’re doing. To John Malone, whose been doing it for 40 years, it is easy and natural. But when you’re doing it for the first time, and you’re presented with a £100-a-metre cloth, every cut feels like a tremendous step. I tried to go rather slow to start with, to make sure I made no errors. I think that was the right approach, rather than trying to work on speed too early.

I practised a lot on my own garments as well. John Malone made a pattern for me and I worked off it, cutting cloth and making it up myself. I was pleased with the trousers I made at the time, but looking back on them a year later there’s a stark difference. It shows most in the seat and the fork, getting enough room to be comfortable while still getting a nice line through the trouser. The fit on this pair I made this week is so much better.