Categories: Bespoke Tailoring, Inside the shop
By Ollie on 9th July, 2012 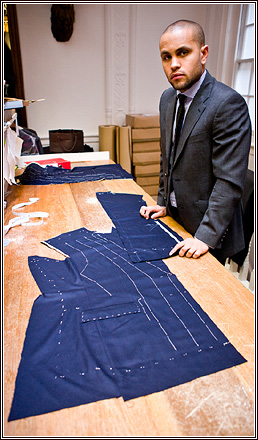 Earlier this year when Mr Hitchcock was on holiday he asked me to look after his customers when they came in, trying the jackets on and doing a few fittings, both forwards and finishes. That seemed to go fairly well, and when he went on the trip to New York recently I performed the same role. There was very nice, positive feedback from customers that time, which was nice.

Now I’ve taken on my first customer, who is actually the son of a long-standing client. It’s perfect because he’s a young guy, someone I can hopefully build up a bit of a rapport with over the years. He’s a few years younger than me, which helps, and we had our first consultation recently. I measured him, we selected a nice navy herringbone – one of our specials – and I now have the first fitting waiting for him, having drafted the pattern and cut the material. It’s a nice mid-weight cloth and will drape really well.

Now I just have to wait for him to come in.