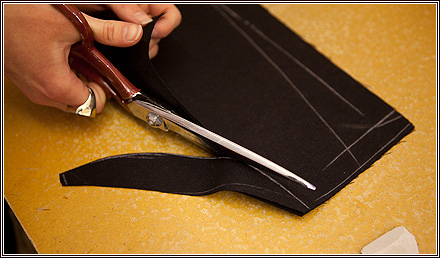 I put together the chest of my second coat today. The first one was a few weeks ago – the people here chop and change the jobs they do day-to-day, no one just does one task, so I’ve been working on other things. I took very thorough notes when I did the first one though, so I just referred back to those and it all went very smoothly. When I had any questions I could still ask. Putting the chest together isn’t that difficult, there are just quite a few measurements to remember.

The canvas on an Anderson & Sheppard suit is always on the bias, at 45 degrees. To achieve that you measure 7½ inches from the top right corner and the same from the bottom left, then fold over the bottom to give yourself a diagonal in the canvas. Then you can lay the forepart of the coat on top at that angle.

You also have to put a tiny bit of fusing on top of the dart in the chest, securing it by pressing with steam, so there’s no lump there. Usually the dart is made from the same cloth as the coat, but if it’s a very heavy cloth then silesia is used, again to make sure it’s not too bulky.

You cut the canvas around the forepart, leaving different amounts of excess or inlay at different points. Up the front edge, for example, from the hem to the point of the lapel, you leave half an inch. This is largely so that if the forepart has to be moved, perhaps to get a stripe straight or match up a check, there is enough canvas to accommodate it. Around the inside of the armhole you leave ¼ inch, while across the neck you leave a ¼ inch for the collar stand and a ¼ inch of inlay. The inlay is often needed in case adjustments are made after the fitting.