Of dobbers and bangers 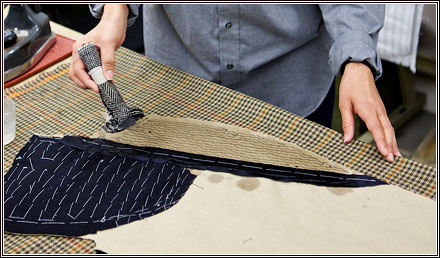 In a previous post I talked about the difference between the dry iron I use for most work and the steam iron outside with the vacuum table. I thought it would be interesting to mention more ways the dry iron is used for everyday jobs on the coat.

I used to have a lighter, easier to handle dry iron, but I switched to this heavier one for doing coats. One reason we need a heavy iron for coats is that we have to mould and shrink some parts of it. The outer collar, for example. Obviously this is curved on the coat, but when we get the cloth it is straight. You create a curve by getting it a little damp and then using the weight of the dry iron, as well as the steam that is created, to shape the collar.

The water is applied with a ‘dobber’. This is just a load of strips of cloth tied together, to form a brush with big absorbent bristles. Most of the tools in the tailoring trade are just called by what they do: they are functional descriptions. But they are rarely written down, so no one here is quite sure how to spell dobber! You can imagine what it does though. There are also two pieces of wood on my bench. One is called an edge board and the other is a banger. Pretty self explanatory.

When you’re using the dry iron you need to put something both on top of and underneath the cloth. Both of them prevent too much heat or pressure being applied, which could turn the cloth shiny. They also protect the wood of the bench. The one underneath is my pressing mat, and is an old piece of tweed (some people use denim) while that on top is the pressing cloth, and is usually a piece of canvas.

Canvas is good because you can paint onto it with the dobber and the water will seep through. It does mean it takes even longer to evaporate compared to the steam iron though. Steam people waft the canvas up and down to let air underneath, but I’ve never found this helps very much.