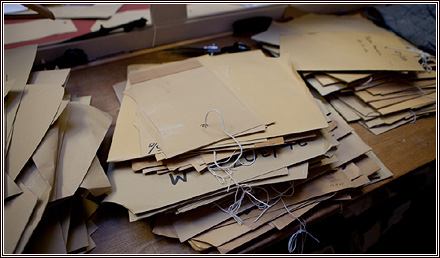 When we have finished using a customer’s paper pattern it is put under Mr Hitchcock’s board. There are two shelves there: one for patterns waiting to be cut and one for ones that have been used and are waiting to be put away. The former had rather built up because of the recent American trip, so I was getting them all out recently to put them away on the rails.

All the Anderson & Sheppard customer patterns are stored on the rails behind the other board, along one wall. It’s great to have all of them within easy reach – I know other tailors often have them stored in basements or other parts of the building.

The patterns are organised so that the oldest are on the left of the top rail and the newest are on the far right of the bottom rail. They are all numbered as well though, so if I’m looking for a customer’s pattern I just go by the number as they’re all in order.

The number is written as 28/300 or similar. The 28 refers to the ledger book that their measures are written in, and the 300 to the number of customer within that book. The oldest we have up there is 22 I think, down to 28 for the most recent customers.

The only other reason we need to patterns is to change them when customers come in for alterations. As mentioned in my last post, customers come in regularly to have things repaired or altered. If they haven’t had anything made or altered for a while, or their changes have happened quite recently, then we may need to alter the paper pattern by cutting it down or adding sections to it.