Categories: Haberdashery, Our Selection
By James on 21st November, 2011 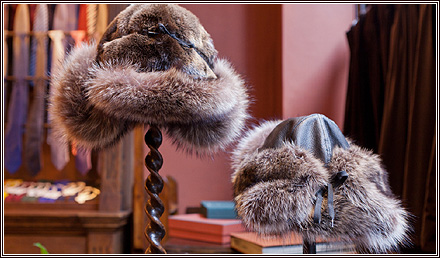 We started selling these fur hats last year and they had a very strong response, so we are introducing them again this year just as it starts to get a little chillier. They are made in Iceland, by hand by a fantastic maker we know who makes in very small quantities.

There are two models, one in raccoon fur on the ear flaps and peak, with the body of the hat covered in beaver, and the other with black leather instead of the beaver fur. On both the ear flaps can be tied on top, as shown, or tied under the chin when the wind gets particularly brisk. The first model is warmer and rather larger than the second, though they both make an impression!

Although there are probably only a few weeks of the year in London when you need that kind of insulation, the international nature of our customers means that plenty of men find them useful in their colder climates. Particularly in the US where it is often that much colder more consistently for large parts of the year.

They’ve both been popular again this year, with the raccoon and beaver option selling slightly faster. We need to keep an eye on stock because the lead times are not short.

They are priced at £600 and £900 for the two models. All the fur is responsibly sourced. One size, usually, fits all.