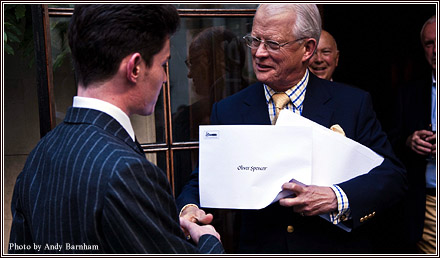 Last month, on 9 July, several Anderson & Sheppard apprentices received their diplomas in recognition of finishing the Savile Row Bespoke Association’s apprentice scheme. The Notebook’s own Oliver Spencer was among those awarded at the event, which took place in the beautiful courtyard of the Merchant Taylors’ Hall.

On a balmy summer evening their friends and colleagues – as well Mr John Hitchcock, who had been one of the adjudicators alongside Philip Parker and Peter Ward – watched the diplomas being presented as the reward for 3-5 years’ hard work. Eric Musgrave and Su Thomas were the two external assessors.

The diploma was set up in 2007 by the Association and involves 30 apprentices, across Savile Row Bespoke’s 15 members. It has built on the need for a structured path that young tailors could follow, as traditional inter-generation teaching has broken down. The diploma was also spurred by the need for young blood as a result of the impressive growth of Savile Row houses in recent years: sales among the Association grew 10% in the past year despite the recession.