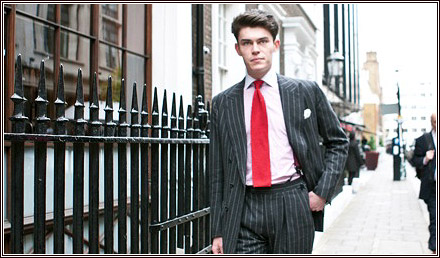 I tried a few different technical things with the trousers I made for myself for the MTBA summer party earlier this year.

I made them with a single pleat rather than the normal two, and rather than just let the absence of the second pleat create a lot more fullness across the top of the bands – as we would normally do – I tried pulling it together into a dart. This worked to a certain extent, as so many innovations tend to. It created shape at the top of the leg, as the smaller volume of cloth made it narrower, but the single pleat that remained didn’t fall quite as well as it would have done with that fullness across the bands. The pleat still works and lies fine, but it’s a different look.

I also raised the back of the waist, which I think increases the comfort on straight-round trousers like this [those not necessarily designed to be worn with braces and so without a rise in the back for them to attach to]. The front is the same height, but the back is cut higher. There’s also a sharp V in the waistband at the back, which allows a little more movement in trousers that are cut higher up.

Finally, I took in the fork slightly to create greater shape around the back of the thigh. It worked, again to a certain degree. It’s better, but perhaps a little too tight at the top of the fork now. It’s not uncomfortable, but next time I might cut it down a fraction. As ever with experiments it’s two steps forward and one step back.