Results of the US trip 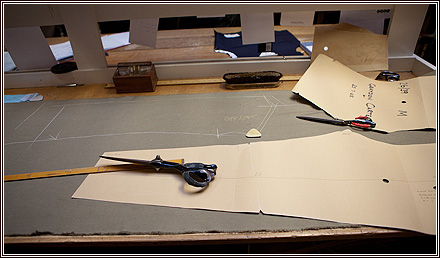 This most recent trip to the US was very successful. We saw a lot of customers and had a particularly large number make appointments at the last minute. We just have to cut it all now. In fact I’ve got two US customers who are coming in next week for fittings on suits they ordered in the US, which has to be a quick turnaround.

One nice anecdote was dinner on the Friday night in Boston. We asked the concierge at the hotel, who we know very well now, to recommend a restaurant. He said he would try to get us into No. 9 Park – it is often very full, but we managed to get a table for that Friday. When we arrived and had been seated, the Maitre d’ came up to us and said he recognised us as being from Anderson & Sheppard, and in fact he knew The Notebook very well.

They have trainee chefs and had been taking inspiration from The Notebook as a way to work with them, in the same way we work with our apprentices. One way was to encourage the trainees to develop their own dishes, one of which was served to us as a little starter. And it goes further than that – the restaurant had been developing bespoke cocktails for customers, where they could specify their own mixes, inspired by the bespoke tailoring that we offer.

It was a nice surprise to meet someone all the way over in Boston that knew us and the site so well.