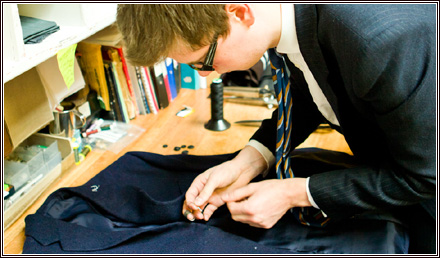 Learning how to sew on a button is one of the first things you’re taught when you join Anderson & Sheppard as an apprentice. I was taught within the first couple of days, but it’s a job I’ve repeated almost every day in the 14 months since then. It’s an easy thing to give a young apprentice to do, and for the cutters it’s a good job to have off their hands.

We don’t button every jacket, only the ones from tailors that are finished in-house. Some tailors, perhaps around 40%, finish the jackets themselves, so they press them and button them before sending them over.

The first thing you do is mark where the buttons will be, by closing the jacket and chalking through the buttonholes onto the facing. This ensures that both sides will match up and sit perfectly. You then double up the thick, polyfill thread and knot it, before anchoring it on the cloth by sewing over the same place twice.

On a four-hole button, you sew up through one hole and cross over diagonally, repeat with the other two holes and then do both once more. It only takes that many to make the button secure. On a two-hole button you just go through the same place four times.

Throughout you have to be careful to retain a little slack in the thread, so that you can wind the remainder around it to form the stalk. This ensures that the cloth doesn’t pull on the button when the jacket is fastened. You only have to go around the slack three or four times, making sure the thickness of the stalk is consistent. You then sew through the stalk twice to secure the thread, and cut it off as close as you can.