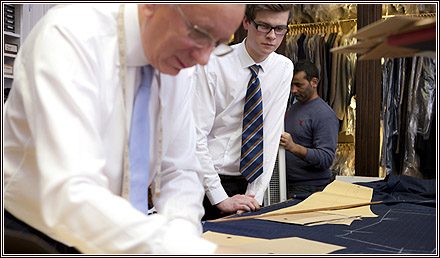 The past couple of weeks I’ve been striking out for the first time – marking the patterns onto the cloth, with chalk – under the supervision of Mr Hitchcock. I’ve been practising quite a lot in my spare time as well, taking a specific lay and marking it out, then rubbing the chalk off and trying again.

While the lays that I’ve already learnt give me a starting point, every customer’s pattern is different so I have to adjust each one to make the best lay on the cloth. One customer recently had particularly large trousers and that wasn’t something my book covered. So I asked Mr Hitchcock and he showed me another way, to incorporate that. The number in my book is growing all the time.

I’ve managed to strike out two patterns a day over the past few days – with Mr Hitchcock correcting little things each time and suggesting I redraw a bit. But I’m getting better: I’ve done two this morning already. It will be a while before I’m saving him time though!

The other difficult part is learning how to draw the parts that need to be done freehand, such as the shape of the armhole. They say it should be an egg-shape, which isn’t that easy to draw perfectly in one or two sweeps of the chalk.

It’s taken a lot of practice but I think it’s just a matter of repetition. I’m getting more at the moment because I’m striking out a lot of waistcoats, which means each suit requires two sets of armholes.