Categories: Bespoke Tailoring, Our Team
By Oliver on 15th August, 2011 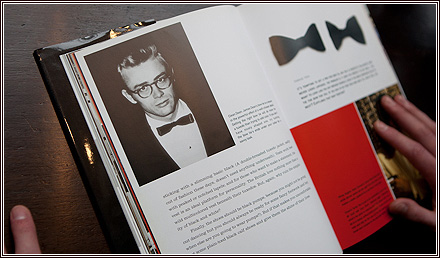 Obviously a lot of James Dean’s style was very casual compared to what we represent at Anderson & Sheppard. But there are some great pictures of him in more formal wear as well.

I read that the Warner Bros studio would make him escort up-and-coming actresses to various formal events, and there is a great picture of him escorting a young Ursula Andress to one such party – I think it is pretty much the only photo of him in black tie. He looks fantastic with that level of formality. It’s a shawl collar, single-breasted model with a crisp white dress shirt and studs I think. The bow tie is quite slim, making it look quite modern for the period.

And then I admire a lot of his casual style as well. It was all about the way he wore his clothes, the character he managed to inject into them. The Harrington jacket he wore in Rebel Without a Cause, for example. He manages to make that simple piece so iconic.

It’s worth remembering that the 1950s were so much more formal – that James Dean and other young actors like Marlon Brando were effectively the first teenagers, in the public eye yet not afraid to go against all the social propriety of dress. He broke away entirely from the traditions followed by everyone else.

In the past couple of years I’ve got into movies of that period, as well as reading a couple of biographies of Dean. I love the style of the movies – Bullitt is a great example, displaying Steve McQueen’s impeccable style of the 1960s.