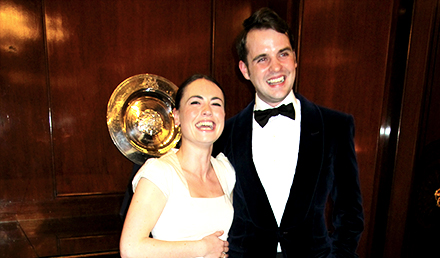 On the evening of Wednesday 12th February, dinner suits were dusted off, bow ties were pressed and shoes were highly polished for the annual Bespoke Tailors Benevolent Association Dinner.  Held at the Merchant Taylors Hall in The City, this event is the jewel in the crown of Savile Row’s social calendar and the style stakes were high.  As we walked in to the reception, we were greeted with a glass of Champagne and by the Toastmaster who grandly announced each guest’s name.  The evening is a great opportunity to mingle and catch up with so many friendly faces from the tailors, cloth merchants and mills.  Dinner was served in the great hall and a thoroughly enjoyable evening was had by all from 32 Old Burlington Street and 17 Clifford Street.

The gala dinner helps to raise funds for The Bespoke Tailors Benevolent Association.  The association was formed from a merger of the British tailoring industry’s two oldest and most revered charities – the Master Tailors’ Benevolent Association (est. 1887) and the Tailors’ Benevolent Institute (est. 1861) – the Association serves to aid and award grants when necessary to anyone who has worked in British tailoring at any level for a period of ten years or more.  The Association’s annual grants currently support over sixty beneficiaries and it has in the region of four hundred members, including tailors, woollen merchants and those from associated trades and suppliers.