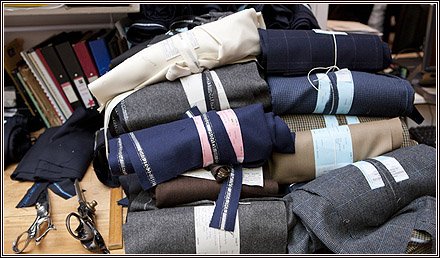 I got my shears in August last year, one year after I joined. I was involved with an exhibition we had at the Victoria & Albert Museum and it seemed as good a time as any. Anderson & Sheppard normally gives an apprentice cutter his shears around that time. Before then I had shared other cutters’ shears, though of course I hadn’t started cutting cloth immediately.

I had also been using the lighter shears we cut paper patterns with, which tend to be shared around more between cutters, and I was using those for trimming etc. John Malone has a particularly nice pair and I often borrow his.

A cutter’s shears are very personal to him, though physically one pair is not very different to another. You just get used to the weight and the sharpness I suppose. The ones we have are all made by Wilkinson’s, though Mr Hitchcock has an old Swiss pair that he was given when he first started.

When you first use shears they are surprisingly heavy. That seems obvious but the continuous weight of them while you are cutting takes a while to get used to. It can be hard to cut really clean lines to begin with. After a while your wrist and your arm get used to it; they strengthen subtly and slowly. You need to maintain them as well – they reward that kind of attention, keeping them sharp and working well.