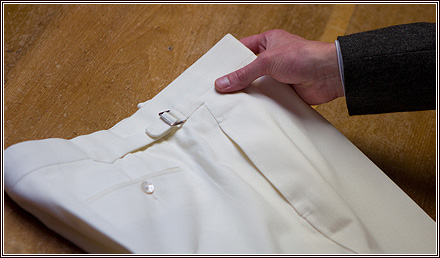 Most customers fall into one of two camps with trousers. If they have had suits made before, they probably have a consistent style and stick with that across most pairs of trousers – style in trousers varies less than with jackets. On the other hand, if they are a new customer and have never had bespoke before, they will have to be walked through the process and have explained what the default options would normally be.

They would not necessarily know, for example, that the trousers they are currently wearing have flat fronts, slanted side pockets and a single – buttoned – hip pocket. The terminology is not familiar. A classic, tapered cut would also be assumed but could be discussed at the measuring stage.

A classic suit is likely to have a familiar, straight-round cut at the top rather than a higher brace-cut. The standard for hip pockets is one, on the right, but we would discuss this with the customer and question whether they would actually use pockets like this in the course of business. We usually have a strap and buckle on the waist with a suit, as shown above, but frequently use buttons or belt loops as well. The question of a flat front or (usually two) pleats would be discussed, with the man’s physique a part of that. A flat front might compliment a larger man, for instance.

Whether to have turn-ups is purely a style choice. Some men like them and some men don’t. If the customer isn’t sure, we might suggest trying turn-ups as these can easily be removed, whereas it is harder to add turn-ups.

One important thing to consider with trousers is the formality of the garment they are going with. So trousers for black tie or white tie, for example, might be more likely to have a brace cut with a very simple pocket configuration – just side pockets, perhaps. And there would be no question of turn-ups.